On meeting Jack Prince you encounter a smart, engaging car-mad soon-to-be 18-year-old, looking forward to getting his driver’s license, driving his racy red car, working part-time at his local mechanics, and playing Grand Theft Auto in his spare time.

What is not immediately evident is the journey Jack has triumphed through to become a “normal teenager”. Jack has spastic diplegia cerebral palsy. This is a neurological condition causing “hypertonicity” or stiffness that usually appears in infancy and permanently affects muscle control and coordination. Spastic diplegia usually affects the legs, and is characterized by the knees turning inward or crossing due to tightness in the hip and leg muscles.

Jack’s right leg was most affected and awkwardly bent, a bit like an “s” shape. This meant Jack needed a walking stick to help keep him upright and balanced. Looming on the horizon was the thought that Jack would one day need a wheelchair.

In 2017 Jack underwent major orthopaedic surgery to his right leg, remodelling his femur, inserting a metal rod and lengthening his Achilles tendon. His recovery involved two weeks in hospital and full-time rehabilitative physiotherapy to help heal and “reset” the muscles to get Jack mobile again.

While the surgery was hugely successful in enabling Jack to walk unaided and he could dismiss the thought of needing a wheelchair, Jack was left with zero fitness, strength and endurance.A year after his operation Jack’s Dad discovered an article about FXU VIBE, a Power Plate studio in Upper Hutt, that had had some success working with people with Cerebral Palsy.

At his initial assessment at FXU VIBE Jack was barely able to stand unsupported on the Power Plate machine. These days he is able to do lunges, deep squats, boxing, press ups, mountain climbers, planks and side steps across the vibrating platform, all without holding on or any assistance.

These strengthening exercises on the Power Plate are helping Jack achieve normal function in his “activities of daily living”. While he has a modified vehicle for driving, he feels that his reflexes, awareness and control for driving have improved. Not only are cars Jack’s passion, being able to drive is hugely important for his independence.

Jack is not the only young man with cerebral palsy following his passion for cars. Nicolas Hamilton, half-brother of Formula One World Champion Lewis Hamilton, races with a specially-modified car due to his cerebral palsy. Nicholas says “My legs are weak and I have very little muscle tone. I have to do a lot of work on my Power Plate just to be able to walk around.”

Training on the Power Plate, at FXU VIBE has helped Jack attain balance, core stability and reduce muscle spasticity. The vibration of the Power Plate helps relax muscles by stimulating natural reflexes and increasing muscle activation. Stretching and massage on the Power Plate also help Jack improve his flexibility, especially targeting his Achilles tendon. Most importantly, Power Plate training has given Jack confidence to use his body.

Six months after starting Power Plate training at FXU VIBE Jack checked in with his orthopaedic team. Jack’s orthopaedic surgeon was amazed at Jack’s progress and was blown away by the fact that Jack had walked in unaided. Jack’s mum, Vicky, is extremely impressed at the improvements he has made in a short period of time compared to the traditional rehabilitation Jack had had previously. Vicky wishes she had known about FXU VIBE and Power Plate sooner. 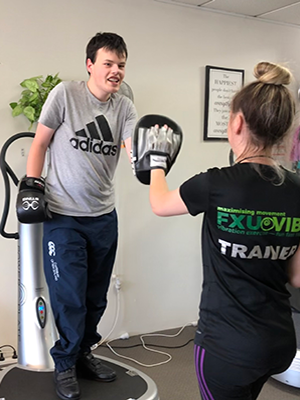 Jack loves the feeling of “free movement” that the Power Plate has brought him and has kept him engaged with his training for over two years.

Prior to Jack’s surgery, school had been an environment that he had struggled to navigate. Being able to get to each class on time with his physical disability was impossible. While the school provided alternatives for Jack so that he didn’t have to transition from class to class, the curriculum they offered him were not a good fit for his interests or abilities.

Following his surgery Jack was enrolled instead at Capital Training where he thrived, passing his NCA levels 1 and 2, retail and hospitality level 2, business administration level 3, and his learners driving license – all within 18 months.

The fantastic support and assistance Jack has been given has resulted in his now feeling “the most normal he has ever felt”, able to truly flourish and have a real shot at independence, with a social life befitting a typical teenager.

While Jack’s aspirations to be a police officer (or racing car driver) are unlikely to be realised, he is interested in doing meaningful work in the community,

No matter what Jack ends up doing as a career, he will do it with determination, humour and the belief that with the right support anything and everything is possible.

If you liked this story about Jack Prince you may also like….

This website uses cookies to improve your experience while you navigate through the website. Out of these, the cookies that are categorized as necessary are stored on your browser as they are essential for the working of basic functionalities of the website. We also use third-party cookies that help us analyze and understand how you use this website. These cookies will be stored in your browser only with your consent. You also have the option to opt-out of these cookies. But opting out of some of these cookies may affect your browsing experience.
Necessary Always Enabled
Necessary cookies are absolutely essential for the website to function properly. This category only includes cookies that ensures basic functionalities and security features of the website. These cookies do not store any personal information.
Non-necessary
Any cookies that may not be particularly necessary for the website to function and is used specifically to collect user personal data via analytics, ads, other embedded contents are termed as non-necessary cookies. It is mandatory to procure user consent prior to running these cookies on your website.
SAVE & ACCEPT